Meet and Greets Are Awkward

I guess for some people meet and greets are not awkward but for me this one in hindsight just was and is one of the ways to describe it….and I wouldn’t have missed it for the world! Lemme’ explain.

My niece made these spontaneous plans to go to Hershey Theater for ‘A conversation with John Cusack’ a couple months ago, we bought the tickets, everything was set! At the time when I said yes, gave my never failing virgo analytical mind many months to prepare for this ‘out of my comfort zone’, not my normal routine, experience. Now that it’s over, I’m glad I went and hoping to find more in the future…just every now and then. Life is about making memories isn’t it really. As minor as this may seem to other people, this was kind of a big deal for me to do something out of the ordinary.

On the day of the meet and greet, my niece and I headed off a few hours prior to when the event started to make sure we beat whatever mad rush there would be during rush hour. The ride was a breeze using the GPS, listening to music, laughing the whole way there . We got there a half hour early, checked in with the family to let them know that we got there safely and proceeded to the Hershey Theater entrance.

The theater is a gorgeous building, very old world architecture and detail. The photo below was just above us where we were sitting. Couldn’t have asked for a more safer feeling place and area to be walking to and from.

We showed our tickets, went through metal detectors and bag checkers into a lobby full of people. Some buying concessions. Some buying signed merchandise by John Cusack. My niece bought a signed poster. Other things included signed ‘what looked like high fidelity albums’, ticket upgrades for the meet and greet, and a book that I didn’t realize at the time I wish I would have bought that is a transcript of the conversation he had with others who met Edward Snowden in a hotel in Russia.

Being closer to 7:30, we decided to find our seats, and proceeded through 3 ushers who came up to us to point us in the right direction which isn’t too complicated. The seats were comfortable, but cramped  like older theaters seem to feel. Almost a school auditorium with little leg room, shared arm rests, and having to stand up when people need to walk by you to get to their seat. Ha! 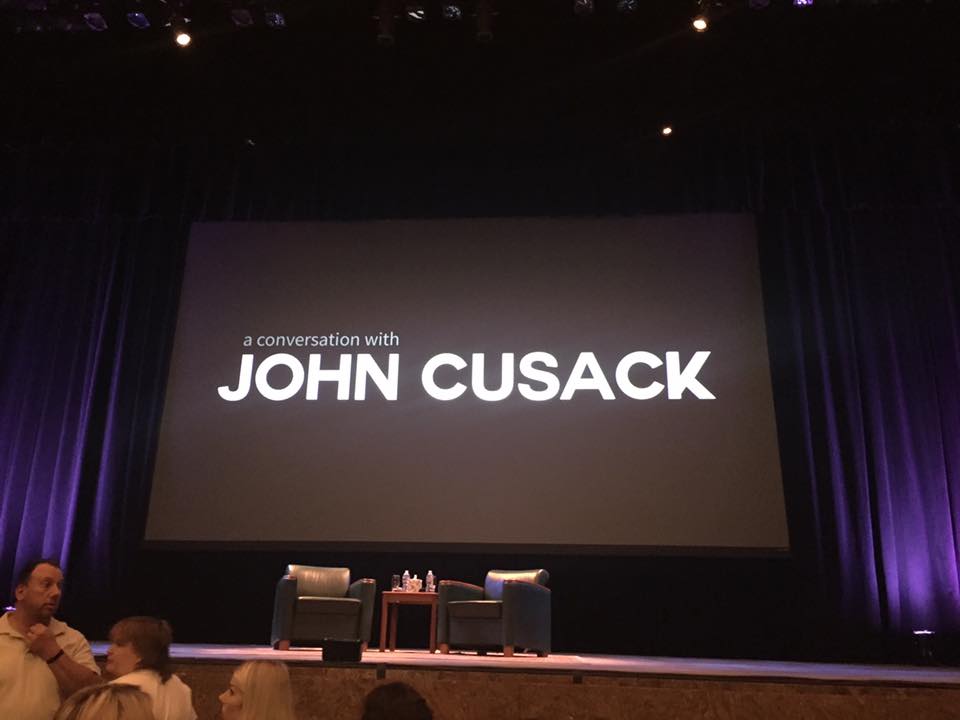 It’s 7:30 and the lights dim and they start to play on the screen the movie Say Anything.  I was so happy to see the movie on a bigger screen. The movie for me was very introspective, made me smile, made me tear up in places. The audience in some parts of the movie I didn’t understand when they laughed out loud. For example, they laughed at the pen scene when she gave him the pen. Was that supposed to be funny like that?  For me, it’s such a sympathetic scene.

My favorite line from Say Anything has to be “Diane Court: Nobody thinks it will work, do they? Lloyd Dobler: No. You just described every great success story.”

One part I definitely enjoyed watching with the audience, was when Lloyd held up the boombox and the audience cheered. That made me smile.

After the movie was over, they introduced the host for the Q and A which was a local ABC newscaster. I think she did a good job with the interview over all. Throughout it did feel like she crash coursed as many movies as she could find to prepare questions to ask him which were just fine and informative overall. She didn’t watch Better Off Dead though. That wonderful, surreal, introspective movie that anyone can learn alot from in my opinion. Definitely recommend. She asked how it was to work with different actors, directors. Some rumors she found she addressed with him to confirm if they were true or not.  About a half hour in, she turned to the audience that whoever wanted to ask questions they could. So two lines formed on both sides of the theater.  Most of the people had very well thought out sentiments and questions I thought were great. A couple marriage proposals of course since he is not married.  Ugh! What would it be like if an actor would actually say, “you know what, yes, yes I will marry you. Why not.”. LOL   Then, at around 10pm one person in the balcony yelled out basically if they could wrap it up since they had to go to work tomorrow. Really?

After the Q and A was wrapped up, and most of the theater emptied, people with VIP tickets were supposed to stay seated and wait for what to do next. So they asked us to form a line off and to the right of the back down a stairway so we did. There was a sign that said no personal photography or autographs. So you gave your bag to some guards that put it on a table before you got to meet him. It was nice that they had a photographer there to take the photos that they then made available online within 24 hours.

It’s such a blur, but here is what I remember when it was my turn to meet him. I went to shake his hand, he held his fist out instead so we fist bumped. Then we went over to stand in place and I remember quickly looking at him and all I could really muster was “It’s really nice to meet you.” He said in return, “It’s really nice to meet you too.” I nodded and then we turned to the camera I put my arm around his back and smiled for the camera. After that I thanked him very much, he said thank you and then I went to get my bag. That was it but that was as perfect as it could have been. 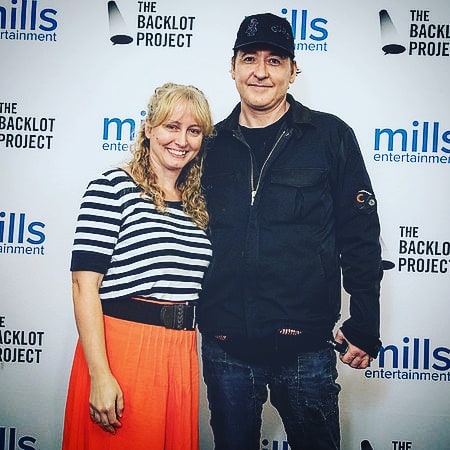 I can find a hundred things wrong with this picture but you know what, I’m happy to have it and it’s all thanks to my niece!

Dressing Up A Dresser