Okay so I spoiled myself again today at a couple of yard sales. 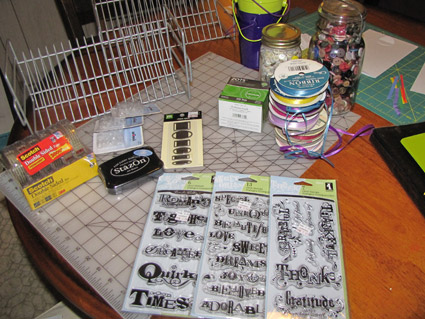 Starting at the top left,

Wire Racks:   I was just looking at the racks that were 2 dollars a piece, and the man asked if I was interested in them, that he would give them to me at a dollar for both. I’m not sure how practical it is, but thought they might work to file my cuttlebug folders into. In case your interested, he said he got them at Ikea.

Purple and Green Metal Pails:   I got these at target. Thought they might work well to hold favors for my kids upcoming 4th birthday!

Jars of Buttons:  I wasn’t going to get them. She had 5 on the large and 2 on the small. I felt I just had to try, so I went back and asked her if she would take 5 for both and she said yes. I thought they were such pretty buttons and would be great for embellishments.

Tower of Ribbon: Got all of this ribbon for 50 cents.

Acrylic Stamps:  I don’t have alot of sentiment stamps and these 3 were on the clearance rack at michaels.

Stazon black: I heard that this ink makes stamping color up well with markers. Thought i’d try it.

Metal embellishments: clearance rack…all the words fit my son so thought i’d add them to the scrapbook i’m making of him.

Double sided scotch tape and zots:  I think after I got the raised dots, I realized the joyous world without gluesticks. Wanted to give these a try. I got medium since I figured i could cut them in half if I needed smaller. I’m guessing i can do that anyway.

Okay i definetly think now i have enough to start making things with. I started an idea the other day, but one design element after I tried it just didn’t look right to me so gave it a rest until i think of something else to try. Will post more as I create them.

The Prepping For Craft Fair Craze!!!