A person who never made a mistake never tried anything new. ~ Albert Einstein

So I got a bread machine, and with 2 successful loaves so far i’m hooked. Blog post on that later.  This weekend, and yes on a bit of a whim, we decided to make a small raised garden to try to grow some vegetables. Also more on that later. I’m enjoying these new food related hobbies I’ve been trying and are a nice break over lunch away from the computer to whip together a pie or a loaf of bread that will be baked and ready in time for supper.

Today’s baking adventure is trying to make a Shoofly Pie.  My husband loves these pies, and purchased a disappointing one a week or so back. So after that we were on the lookout for a recipe and some molasses!

You mix the crumble in one bowl, and the molasses mixture in another.  To be easier, we love Pillsbury pie crusts so used one of these. I put flour on the bottom so it doesn’t stick to the pie plate.

After you prepare everything, you begin layering the mixtures. First pour half your molasses mixture into the pie pan. Then you cover the top of that with half the crumble. Then pour the rest of the molasses mixture. I made sure to pour it around as even as i could get.  Then top that with the remaining crumble.

The recipe said it would be jiggly, but it wasn’t at all so I should have checked it at 15 minutes instead of 20. 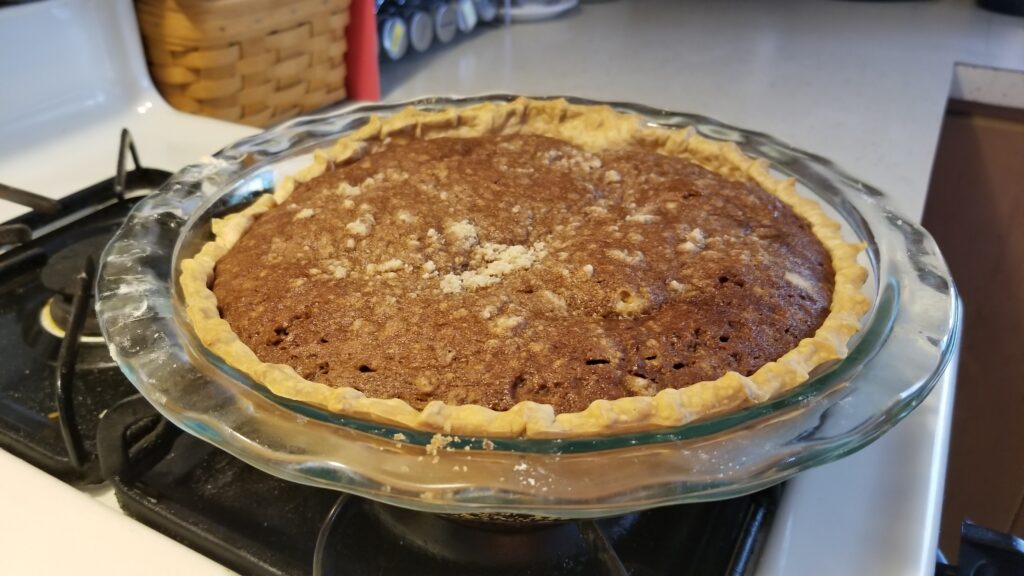 Learning anything new is about trial and error though.

Taste Test Results: Well, it wasn’t great LOL.  The molasses part was really good but there wasn’t a lot. It was mainly crumble. So we are going to try to find another recipe to see if it works better.

What have you learned new today?

How to Hang a Wreath On A Wooden Door

A Hike Through The Woods